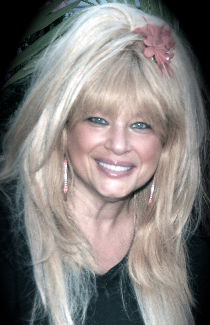 A rock chick at heart, Julie has a thing for musicians.....she co-exists with Michael Stanley Band guitarist Danny Powers.

What School did she go to?

Julie's family is from  Shaker Heights. She went to Moreland,  then graduated from Garfield Hts. High School before moving to NYC to study acting at the famed Actors Studio.

Who are her Groovy Friends?

Julie’s really diggin’ that she gets to hang out with the popular girls, like The PopTarts! Julie and Wild Blue Laura did a Tv Show in the 80's called CLEVELAND ROCKS where they got to meet up with aLOT of famous rockers!!!  Our fans have been lucky to meet some of Julie's pals from the classic television era, like Pat Priest and Butch Patrick from The Munsters, Lou Ferrigno from The Incredible Hulk, Kathy Garver from Family Affair,  Paul Petersen from The Donna Reed Show and the Soup Nazi, Larry Thomas.

Julie likes to walk off ice cream by walking in the park with her dog. She likes to watch sitcom reruns...everyone knows her FAV is I Love Lucy!!

She likes to go to Montreal. Her fav Canadian Band is The Musical Box.  Believe it or not, Julie is an award winning film producer and works in movies as a casting director and acting coach.  She currently has 2 feature film motion pictures in development.  Julie is also the television spokesperson for The Children’s Miracle Network event, America’s Most Photogenic Baby.

She is a coffee lover.

Her favorite flower is a peony.

She’s not going to say who she’s dating, but he’s a drummer and seriously groovy.

What are her Groovy Dreams?

Wild Blue dreams of living in Paris one day and writing the perfect song.  Her piano would overlook the Seine, she’s just sayin’......

On any given day, Laura’s dog Scout has lots of doggie friends come over for a visit.

Laura loves listening to music and singing Motown, reading, gardening and traveling.  Being a PopTart has allowed her to explore her wild (blueberry side), which has been a lot of fun!!

Laura is a singer, performer, actress, model  and television personality.  You may recognize her from her days in television working as a traffic reporter.  Take a tip from this Tart if you want to know what your house is worth....she is also a licensed real estate appraiser. What are her Groovy Dreams?

Lisa dreams of flying in a pink VW Beetle with PopTarts.  She hopes to have an original song she wrote for The PopTarts made into a video.

We are not sure why her cat’s name is DustBunny, but let’s just say that none of The PopTarts own a MOP!!   (For other kitchen floor cleaning tips, see Very Cherry’s “Tart-Tips-From-The-Pits”)

Fun for her, and fun for you too, Lisa sings whenever and wherever! She also enjoys gardening and sleeping!  She loves to eat chocolate and find fun jello molds to make jello.   Did we mention napping?

Lisa loves playing records in her room, talking on the phone and pajama parties. She adores being able to sing what girls everywhere are feeling and thinking and she hopes our songs give young women inspiration!  She also hopes the boys think we’re choice!  Lisa says, “I want to turn the world on with my smile, and teach the world to sing in perfect harmony”. Very Cherry RED.  Shhhh, it’s a secret, she really loves purple! She wishes Goofy Grape was her PopTart flavor since she has a purple bedroom, purple bathroom, purple doors and wants a purple car!

Gone To The Chapel, Laurie is head over heels for her high school sweetheart from Mayfield High.   Although he is a jock, and she runs around in the “artsy” crowd, it seems to work for these  two love birds.

What did she do before she was a PopTart?

Laurie was more of a Broadway show tunes kinda girl which was showcased in her act Two Reds Are Better Than One.  She’s been in a show choir for many years, where she has produced shows, choreographed and written many scripts & jingles, as well as sung at the Allen Theater and with The Cleveland Choral Arts Society Choir.

Who are her Groovy Friends?

These days....The PopTarts of course!

Laurie loves to raise orphaned baby animals and has been known to bring her bottle-fed babies everywhere she goes including:  Doctor's appointments, stores and to her office.  Her pets over the years included a squirrel she named Nigel, (who lived his whole life in her home), and many cats and her shelter rescue dog, Zack.

Laurie is a bookkeeper. That’s all we can say, now just fahgettaboudit!!!  Seriously, forget about it....you didn’t hear that from us!   Very Cherry is a model homemaker and author to  TART-TIPS-FROM-THE PITS.  ﻿